The Plone community in South America, the PloneGov-BR and the Interlegis Program in 2012 promoted the 4th edition of Plone Symposium South America, from August 22nd to 24th in conjunction with V EnGITEC.

The Brazilian Government is one of the biggest users of Plone with large portals like www.brasil.gov.br,  www.camara.gov.br and www.tse.jus.br. A large part of the Brazilian Plone community lives or works in Brasilia and it was a natural move to host Plone Symposium South America there.

Organized by the PloneGovBr group and hosted by Interlegis, from August 22nd to 24th, followed by the Caipirinha Sprint on August 25th and 26th, the Plone Symposium South America had its fourth edition with Elizabeth Leddy and Nejc Zupan as keynotes.

Responsible for more than 400 active Plone sites, the Interlegis Program hosted the symposium and also the V EnGitec -- a conference for the Interlegis community. 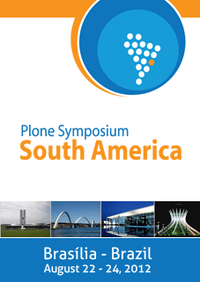 This was the biggest Plone Symposium South America so far:

All talks were streamed live (with a peak of 100 simultaneous users) and videos will soon be available on the symposium site.

The Caipirinha Sprint gathered more than 20 people during the weekend and some achievements were:

Also, it is worth mentioning that 6 people contributed code for the first time to Plone core. Some of them were long time Plonistas but never had the opportunity to move from the collective to the core.

Elizabeth Leddy wrote a blog post about the first day of the sprint, you can read it here.

Most of the pictures were posted on Instangram and Twitter under #plonesymposium but the organizers of V Engitec compiled albums for each one of the Plone Symposium days:

The organization team for the Plone Symposium South America would like to thank the sponsors:

The Interlegis Program  was the result of a desire to bring together in a single community all of Brazil’s federal, state and local legislative bodies, aiming at their modernization, to enable them to improve their administrative and legislative procedures.